Inspired by Mother Earth and the Spirit World, William Monague shares his unique artistic expression and Anishnabek Culture by providing the "Spirit of Color" to any home or business.

William grew up on an isolated island, he enjoyed doodling Indian princesses and was inspired by stories, traditional teachings and the beauty of nature surrounding him.  He became a self-taught artist on a lifelong journey.  With no access to formal education or training in the arts he found himself guided by the encouragement of his sisters, affection of his mother and influence of Midland Secondary School High School teachers Mr. Lalonde and Fran Wraith. His art became a lifelong ambition.   During workshops and events William shares the knowledge that learning is a lifelong journey.  The humble natured artist has had a positive influence in his Beausoleil First Nation community.

Thirty three years ago, in 1979 after creating an extensive amount of arts and crafts William Monague left his small community on Christian Island with the ambition to travel and sell his work.  For months he travelled and sold extensively while living out of his van.  He attended Pow Wows where Museum Curators frequently acquired his traditional works of art.  His art was purchased by Stores and Friendship Centres across Canada, throughout the United States and into Mexico.  He returned and made his home in Mission, British Columbia where Monague Native Crafts Ltd. was established.  The business bestowed with his name is now one of Canada's leading global producers and suppliers of native products.

Since that time William has remained dedicated to his lifelong journey.  He is inspired by helping others and donates his time and artwork to many worthwhile causes. William’s artwork is auctioned yearly in support of the fight to end violence against women and recently completed three panels of art for a project “Woman Recreated” marking the 20th anniversary of the Human Rights Office.  Supporting worthwhile causes and helping others is important to him.

William remembers the place he grew up and the support of family, chiefs and leaders who recognized his talent and skills. William's art is commissioned and acquired by collectors, businesses, corporations and organizations nationally and internationally throughout the world.  He has accepted many awards of recognition often acknowledging the family, teachers and friends who inspired him to continue his artistic journey. 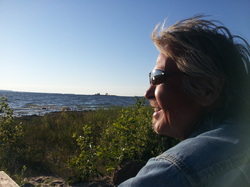